Beverly Dabliz is ready to celebrate a monumental 60th anniversary but even her closest friends do not all know what it is for. Recently she decided it was finally time to share the news. “Just last week I told a close friend I’ve known for 66 years – I’m the godmother of her twins, but even they did not know I have an ostomy. It was just not something people talked about,” Dabliz says. She adds “People are surprised to learn the news, but it does not matter to them one bit.” 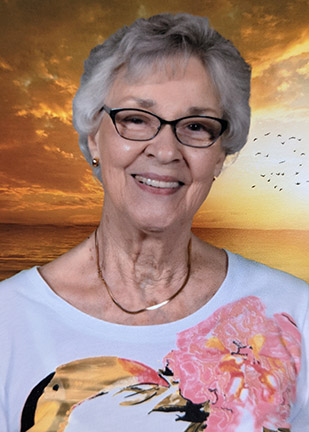 Dabliz had ileostomy surgery in 1962 at Ferguson Hospital in Grand Rapids, Michigan. Ferguson was one of the first clinics in the world to perform such surgeries. By the time she turned twenty she was suffering from ulcerative colitis and by twenty-four ran out of treatment options. “After sixty years I have never regretted it, it has allowed me to live a great life,” Dabliz says.

Almost no one with the exception of her doctor understood the procedure and how to care for it. She knew she was on her own on how to carry on and reach her full potential.
Even if you have a great support network Dabliz recommends, “You have to own it and take care of it.” Ostomy supplies of that time bear little resemblance to the lightweight, contoured appliances of today. “I wore a heavy two-piece rubber appliance held on with an ostomy glue,” she recalls. It was not until the 70s that pouching systems began to evolve into something similar to the one and two-piece systems commonly used today.

“It was just not something people talked about,”

Over the years Dabliz has helped other ostomates in need through the Detroit Metro Ostomy Support Group. While doing hospital visits she would always appear in fitted clothes and enjoyed how grateful the patients were to hear from someone else living with an ostomy. She is happy about the recent return of in-person support group meetings. At meetings, Dabliz is sometimes surprised by some of the concerns new ostomates have regarding things like food, “I just tell them to be sure you chew your food very well, in the beginning, I tried it all without being scared but I’m still often the last one eating. I chew my food so well I’ve worn down teeth.” 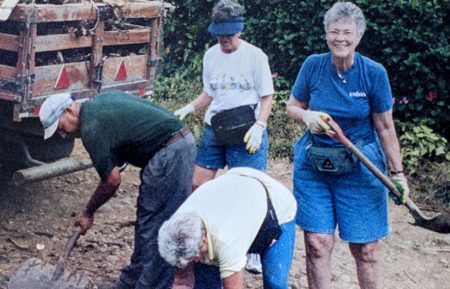 Beverly Dabliz, right, works during a mission trip to Costa Rica with her Michigan church group.

Dabliz worked in the accounting department of a computer company in Detroit and Plymouth, Michigan for 45 years before retiring. Her boss was aware of her ostomy and supportive. “I never missed a day of work because of the ostomy,” she says.

Six years ago Dabliz had a fight with kidney cancer and three years ago a shoulder replacement surgery. But she has otherwise been fortunate to live a healthy life since the ostomy surgery six decades ago. She still makes it a point to get out of the house almost every day. “I have always been very active and really have not had any ostomy issues,” Dabliz says. In her eighties now, she still enjoys golfing and was in a bowling league for many years.

Beverly Dabliz working as a volunteer at the Eagle River Methodist Camp in Juneau, Alaska.

Dabliz can also still be found tending to her yard and is reluctant to give up shoveling the Michigan snow – though neighbors have started beating her to it. With the exception of some subtle changes, her ostomy regiment remains routine. She consistently uses the same products.

Dabliz is an active member of her church and has gone on many mission trips over the years in countries such as Jamaica and Costa Rica. “I’ve had to use outhouses in Alaska and done mission work after Hurricane Katrina,” Dabliz says. Even in these tight living quarters, nobody knew she had an ostomy.

An ostomy has never gotten in the way of her passion for traveling and cruising the world with her older sister. The pair have even circumnavigated Australia and New Zealand. Her advice; “I take extra supplies and always bring some on carry-on and have never had any trouble flying. Just do it. Go swimming, do whatever you want to do,” she says.

In celebration of her 60th Stomaversary and 85th Birthday, Dabliz is hoping to take a Holland America cruise around Iceland with her sister. Her minister and family have known of her ostomy but she hopes to tell more friends about what this landmark occasion means to her. Dabliz is confident they will take the news in stride as they help her celebrate a life that could have been cut way too short if not for that long ago ostomy surgery.

From the board room to construction, to long shifts in a hospital, people with living with an ostomy (colostomy, ileostomy, urostomy, ect.) work every job imaginable.  Embracing a “new normal” in life after ostomy surgery is key to living an active life, and that daily norm means going back to work.

According to the American Society of Colon and Rectal Surgeons once a person has recovered from surgery your ostomy should not limit your return to work. When you return depends on your individual recovery, ease of pouch management and how physical your job is (due to the increased risk of hernia).

Whether to tell your employer or co-workers is a personal choice depending on your unique work situation, but some feel it comes in handy if you require frequent breaks or other accommodations. Remember your co-workers will likely not realize you have an ostomy unless you tell them. With some preparation you’ll soon be confident in the workplace, and for many, feeling in better health than before surgery.

Here are a few tips from the UOAA Facebook community and Advocacy Network.

Wish some preparation and patience you’ll soon be confident in the workplace, and for many, feeling in better health than before surgery.