Tag Archive for: Dressing with an ostomy

Our Ostomy Gives Us Power!

As president of our Ostomy Support Group in Summit, New Jersey, I have met many future ostomates over the years since I have had mine, and we have met in various places, depending upon their health, etc. The one that stands out in my mind is a meeting at a shopping mall a few weeks prior to her ostomy, with Carol, a woman who wanted not only to see the stoma for herself but to understand how it would fit into her life. She loves clothes, as do I, and was frightened she would need not only to purchase a new wardrobe but to change her style of dress. 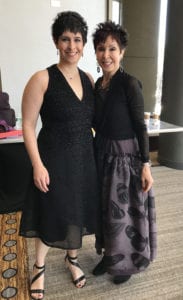 The best way to show my stoma to her was to go into a fitting room in a store. We brought in some clothes that were of interest to her, and I proceeded to try them on, demonstrating how my stoma (Lily, as I have named her) would fit neatly and snugly under the clothing. I was reminded that as soon as I had my ostomy four years ago, I gave away all of my belts and fitted pants. I was certain I would never wear them again, despite being told that wasn’t true. To the contrary, I saw pictures of great looking women with ostomies online in tight jeans with belted waists. It was just too hard to imagine myself wearing belts and jeans with a pouch, and since these women were not in front of me, I couldn’t ask them “how do they manipulate their appliance to be comfortable and secure?”

Knowing it would have been invaluable to me to actually see an abdomen in clothing, I wanted Carol to have the proper introduction to dealing with her wardrobe. We laughed as I told her of my quest to replace my jeans and belts over the years – since I have learned I can wear almost anything! In truth, my “go-to” outfit is most frequently leggings and tunics, dresses and full-legged pants with a tank, covered by cropped tops. I am what is known as “funky and fashion-forward dressing,” as I learned when I was the fashion trainer for Macy’s years ago, and happily, my style hasn’t had to change due to Lily, who requires a high-output pouch that is so long, and I am so short, that it rests on my thigh! 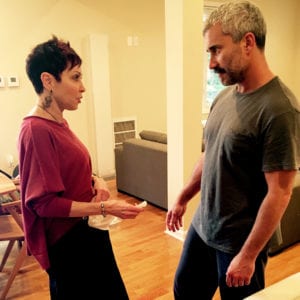 Wide-eyed, but a little more able to envision her own “Lily,” Carol and I left and grabbed some tea at the nearest Starbucks. We sat and talked about the changes she anticipated and feared, and then she asked me what I really, very truthfully, feel about being an ostomate? Without missing a beat, I very simply said POWERFUL! I told her that as I look around at the many people shopping, I know I have a secret, and that secret is that I am strong, a survivor, and I can help others. Knowing that gives me the most positive feeling, and I am grateful, and want to share it!

I have checked on and even visited Carol as she recovered from her surgeries – since there were a few. Sadly, there is no straight line for any of us, and depending upon the reason for the ostomy, recovery can have many twists and turns. My own led me to need to spend weeks in the hospital and then a rehab facility. But she is improving daily and gaining back her strength and determination. I know she will join our support group or another closer to her home. I also know that before too long, she, too, will be accomplishing her goal of like me, being trained to become an Ostomy Visitor…to meet with and help others learn how to cope with their ostomy, and how POWERFUL they truly are, as well!