My name is Jodi Capobianco, I am 54 years old and have a permanent ileostomy.  Five years ago I was diagnosed with severe off-the-charts constipation and was to receive a temporary loop ileostomy.

I am so thankful that I did not let having an ostomy get in the way of me missing out on this awesome adventure.

Shortly after my surgery, I began having problems. To make a long story short, my colon became diseased and they removed it giving me a permanent ileostomy.  Unfortunately, shortly after my colon was removed I developed an abscess.  I actually ended up developing seven more before an amazing surgeon figured out that I had a leak.  He performed a small bowel resection and made my loop ileostomy an end.  That was over two years ago.  I was so weak when I came home I was using a walker.  I can honestly say life is now amazing. In fact, I just got back from rafting the Colorado River in the Grand Canyon for eight days. 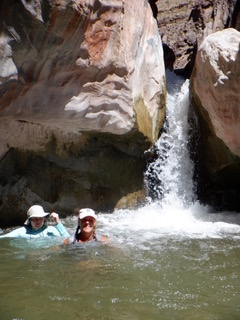 There were no bathrooms, heck there was no nothing just the big outdoors. I went with my husband, our trip started on a Saturday morning when we flew from Boston to Arizona. I was pretty pumped when my ostomy was not an issue while going through security.  Not that it is a big deal to be patted down, but it was nice to be able to skip it.  When I fly I try to limit my intake so I am not having to empty on the plane.  I also stay away from anything carbonated when I am out, so no bubbles.  We arrived in Arizona after traveling for about 9 hours. We headed to our hotel, where of course our room was not ready and got lunch.  I knew I would be near a bathroom for the afternoon and evening so I ate what I wanted.

That night was the orientation for the trip. I learned we would on the bus for about three hours the next morning with no bathroom break. Departure time was 6:45 am.  I decided not to eat breakfast but brought a bagel with me. I ate about an hour into the trip. I knew I would be able to use a porta-potty at the boat launch.  On the morning of the trip I changed out everything.  I ended up using wafers that were precut.  I usually cut my own but I did not want to have to deal with that. I used closed-ended bags that were waterproof. I am usually a drainable girl, but again I knew there really would not be a place to drain anything especially during the day. I also used three brava strips for reinforcement, and I use a ring under my wafer.

I had two complete changes in my dry bag, then in my shorts or pants I had three bags in a zipper pocket, I also kept a bag in my backpack in case we went hiking.

We were all given two dry bags for our stuff, one we could get to during the day and one we could not.  In my day bag, I had enough supplies to do two complete changes, 5 disposable closed ended bags as well as five bags I could put the disposable bags in.  The first night when we stopped at camp I was given my own ammo box.  This was a metal box that sealed.  I was able to put all my waste into it.  In the morning I would give the box to the trip leader, she would empty it and then when we stopped at camp for the night she would discretely give it back to me. The only bathroom in the camps were either behind a tree or rock and they consisted of a yellow bucket with a toilet seat on it to pee in and a metal bucket that contained waste.  I would pee in the yellow bucket but luckily did not have to deal with the smelly bucket for pooping in.  I would simply pop bags on and off when I needed to. 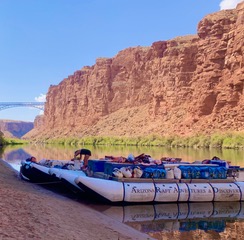 When we arrived at the camp for the night, which generally was a large sandy area by the side of the river, we all helped unload the boats.  Once the boats were unloaded, one would find their campsite for the night, lay out a tarp and sleeping pad. This is when I would take a minute to get organized. For me, this consisted of placing two closed-ended bags and baggies in a plastic cup near my sleeping bag.  This was so I could change in the middle of the night if I needed to. I also would place my headlamp nearby so I could find it easily in the dark and see what I was doing.

When popping a pouch on and off, I would place a small baggie (I used the blue ones that came with my bags) under the disposable bag so when I unclicked and popped it off it went right into that bag.  Next, I would pop on a new pouch and be good to go.  For the most part, I changed bags when we got to camp, right before bed, once in the middle of the night and when I woke up.

Having the precut wafers and closed ended pouches made all the difference in the world.

During the day I would set myself up as follows:  I had two complete changes in my dry bag, then in my shorts or pants I had three bags in a zipper pocket, I also kept a bag in my backpack in case we went hiking.  I would change bags after breakfast before getting on the boat and when we stopped for lunch.  I was generally good until we got back to a camp. 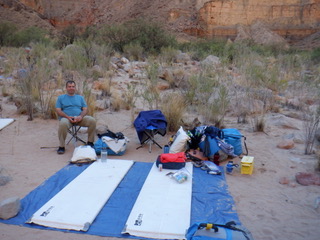 To change I would hide behind a rock or a tree or sit on my sleeping bag with my back to everyone.  I also had a small package of biodegradable baby wipes with me.

There were two times I had to change everything.  The first was three days into the trip.  I got off the boat and my skin itched.  This is generally a sign for me that something is leaking.  I had been in the water a ton this day so I was not surprised.  I peeled off all the adhesive from the brava strips as best I could, dried the area off, and put on a new wafer and popped on another bag.  The second time was two days later.  I knew that this time I really needed to wash the area and try to get a bit of the adhesive off my skin.  So, I went down to the river with a small washcloth that I had packed.  I took everything off and dipped the washcloth in the river and then scrubbed my skin as best I could.  I dried the area, covered my stoma with the cloth and went back to my campsite where I put on a new ring, wafer, brava strips and pouch. I did this all while trying not to get any sand on my skin.  Having the precut wafers and closed ended pouches made all the difference in the world. 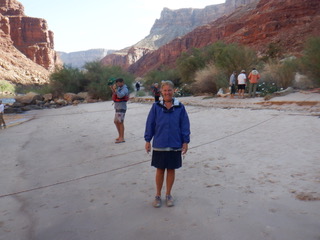 The last day on the river was a half day.  Once we got off the boats we are onto a bus for three hours.   Luckily there was a real bathroom stop.  Here I just switched out bags.  We got back to the hotel and into the shower I went.  I had so much adhesive on my skin.  I used a ton of adhesive remover, then took a face cloth and washed the whole area.  My skin looked pretty good for being engulfed in adhesive for 8 days lol.  It took a while to get all the adhesive off.  It felt amazing when it was.  Obviously, when I got out of the shower I dried off and put on a new ring, wafer and bag, no brava strips.  My skin was very happy for this.

I am so thankful that I did not let having an ostomy get in the way of me missing out on this awesome adventure. I refuse to let anything get in my way of living.  I attribute the success of this trip to closed-ended bags, precut wafers, being organized but also for patting myself on the back and having an awesome attitude. 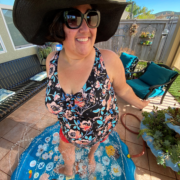 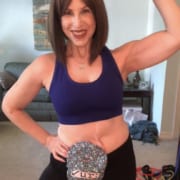 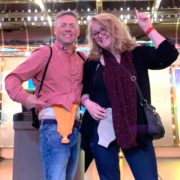 Double Baggin’ It: A Tale of Two Best Friends Without Buttholes 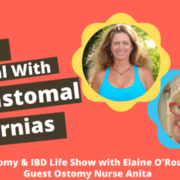 How to Deal with Peristomal Hernias 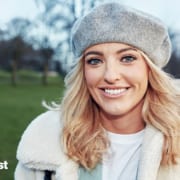 Fashion with an Ostomy 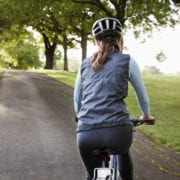 Get Back in the Game
0 replies