It was raining every day, for weeks, before Taylor and Michael were set to get married. But as the recently wed couple stepped out of the church for photos, only the sun was 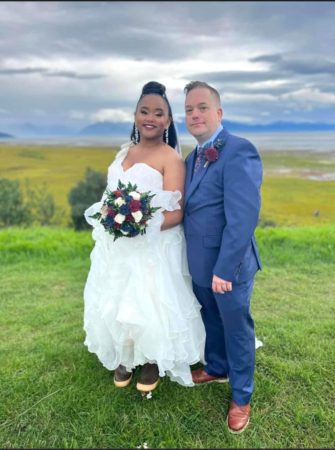 “It was an absolutely magical day,” says Taylor, the bride. “Taylor took my breath away when I saw her, she was absolutely stunning,” Michael recalls.

Even if the dark clouds had drenched their special day, it’s doubtful it would have dampened their mood. This specific couple is used to living with ostomies and chronic illness and they seem prepared to weather any storm.

Friends from the Start

Taylor and Michael first met ten years ago in a local college undergrad class. “I scanned the room, saw him, thought he was cute, and decided I wanted to sit by him and try to be friends. I didn’t know if anything would come of our friendship. We had a great connection as friends, Taylor recalls.

“She was smart, insightful, and easy on the eyes, but I would never have imagined she was interested in me beyond friendship,” Michael says.

The friendship slowly turned into dating. “We have a lot in common and also have a lot of differences. I love to plan, and she is more spontaneous. We both respect each other and can be vulnerable with each other, and the biggest thing is we trust each other,” Michael says.

Taylor says some things she loves about Michael is that he understands her and that they have a shared faith. “He always wants to help me any way he can, and he’s generous to others,” she says.

What is an Ostomy?

“While we were dating, I didn’t know Michael had an ostomy for a while and when he did tell me, I had no idea what it was,” Taylor says. “His ostomy was never an issue for me and so my experience while dating was positive! His ostomy never impacted anything in our relationship from my perspective.” 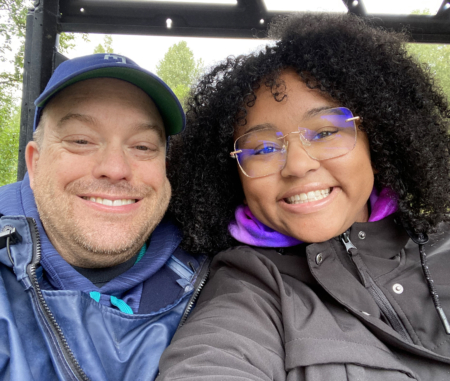 Michael has had a long ostomy journey and awareness, his mother had a urostomy. ”I had a colostomy for about two years, takedown for four, and have had a permanent ileostomy for the past fifteen years due to complications with Crohn’s disease,” he says.

“My advice would be, if you’re a person who doesn’t have an ostomy and finds yourself dating someone with an ostomy, educate yourself and do your best to understand your partner, their limitations (if any), and then just treat them as a regular person!” Taylor says.

Taylor also advises that if you have an ostomy and find yourself with someone who doesn’t have an ostomy. “Give the partner an opportunity to accept you and make the choice for themselves on what they’re comfortable with. You’re not for everyone and that’s ok and vice versa! I think it will always be slightly nerve-wracking to have a body that isn’t “normal” by current beauty standards because of the fear of rejection and embarrassment, Taylor says. “Society tends to tell us that no one will want us if there’s something “wrong” with us. But, if you can muster the courage to put yourself out there, the outcome may be better than you ever imagined!”

I don’t think we will have any more challenges than the average couple… we just poop differently. -Michael Ross

In Sickness and in Health 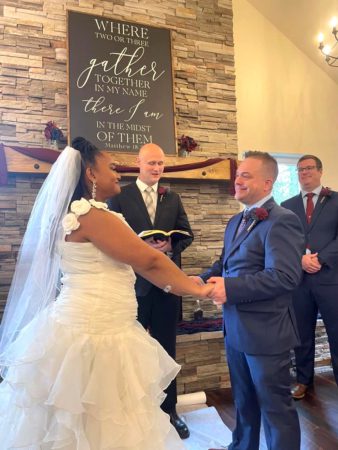 Caregiving has been a consistent part of Taylor and Michael’s relationship. “When Michael had to have revision surgery, I wanted to make sure he’d have easily accessible food so he could focus on healing. I came over to his house prior to surgery and we made a few different meals to freeze. It was a great feeling for me that we got to spend time together cooking and his food would be taken care of while he recovered. He was used to taking care of himself so it meant a lot to me to do this for him.”

Meanwhile, Taylor started dealing with her own undiagnosed chronic illness. “I had to go to the Mayo Clinic while we were dating, and he took time off of work to come with me for a week. He came to all my appointments and helped me navigate all my emotions with what I was dealing with. This is the kind of thing we do for each other, we try to make the hard times easier by taking care of the small things and the big things,” she says.

Just a year and a half ago Taylor, with her health worsening Taylor had ostomy surgery as a result of chronic constipation. For better or worse they were now an ostomate couple.

A Couple of Ostomates

After her ostomy surgery, Taylor says she, “shared with him every single aspect of what I was going through. It was nice to be with someone who already knew! It felt good from my perspective to understand him better, now that we had the same appliance… I actually knew first-hand what he was dealing with.”

Michael says that one of the best parts of being with another ostomate is knowing that someone really understands what you are going through. “It’s nice to be able to compare notes on new products and understand when my partner isn’t feeling well, to have the option to share supplies, tag along to doctor’s appointments, and ask questions about care, procedures, and recovery,” he says.

In addition to a new mutual understanding of health issues, Taylor says, “We know what to do if one of us isn’t feeling well. We just understand each other on a deeper level. He accepts me as an individual and he accepts my body even as it changes with all my health challenges.”

It felt good from my perspective to understand him better, now that we had the same appliance… I actually knew first-hand what he was dealing with. -Taylor Mitchell

As for difficulties, they both dread a possible double leak at night, and can imagine the challenge of not feeling well at the same time or needing a procedure around the same time. Taylor says the most challenging part has been encouraging the other to stick to the foods that work for us, to drink water more consistently, and get our electrolytes in.” Michael concludes, “I don’t think we will have any more challenges than the average couple… we just poop differently.”

Even with partner support, Taylor says “UOAA has been so incredibly important to me in my ostomy journey. When I first got my ostomy, I scoured the UOAA website and read every piece of information I could find which helped ease my mind and answer my questions. UOAA’s website also helped me to be able to share information about my ostomy with family and friends.”

The couple, who both work in logistics, has recently moved to Colorado but while in Alaska both say they had the good fortune of having Luella Odmark as their WOC nurse.

“Luella is an amazing individual who cares so deeply about ostomates,” Taylor says. She does a training for nurses at one of our hospitals and has invited my husband and I to speak to the class about our ostomy history, give advice on what we wish we had from nurses, doctors, and hospital staff as well as sharing some of our favorite products,” she adds.

“I enjoyed observing the transformation of two people pursuing their own interests, coming together, including getting married, now mentoring others about ostomies,” says  Odmark, a WOC Nurse and the leader of the Anchorage Ostomy Support Group. “I hope to see them continue to spread hope about living with an ostomy,” Odmark adds.

Odmark also joins the couple each Ostomy Awareness Day to walk the Run for Resilience Ostomy 5k. The experience was especially meaningful to Taylor. “The Ostomy 5k was a huge accomplishment the first time I did it because I was three months post op and it was a huge struggle for me to walk a 5k, I almost didn’t finish it and wanted to give up so many times. Taylor continues, “My second time, this year, it was still a hard thing for me to accomplish but I did so much better! I loved seeing people from all over doing their 5k however was comfortable for them. It was encouraging!”

UOAA has been so incredibly important to me in my ostomy journey. -Taylor Mitchell

Taylor is especially open about her ostomy journey and embraces Ostomy Awareness Day as a chance to connect with more people online and see their stories. “It’s such a nice feeling to know that I am not alone. I see people who are confident with their ostomy and I see people who are working to build their confidence,” Taylor says.

Taylor hopes to help even more people and nurses through UOAA outreach opportunities. “I love UOAA’s mission, I love the work they do, and I love all the resources that are available for FREE so financial barriers are removed for as many people as possible. Accessibility is so important! I am proud to be a supporter of UOAA.”

Michael agrees and adds, “I’m very thankful for all of the people that organize the walk, work with ostomates, and are around to help us on our ostomy journey. I’m most thankful for my wife, who I get to take this journey with every day.”